As a first time Mum you are going into Motherhood with your eyes wide shut.  Yes wide shut!! you really don’t know what to expect and personally I had absolutely zero knowledge of babies what so ever except for what I had learned at the ante natal classes I attended prior to Edens arrival.  I had never held a newborn baby in my life, if one of my friends or family gave birth I avoided holding their new bundle until they were at least 3 months and in my eyes slightly less breakable.  From my own person experience I think the less you know the better as you aren’t so critical of yourself if you are comparing new baby to a previous baby or if you are trying to follow a manual.  Anyway apart from peeing, pooping and feeding another favorite pastime a newborn loves to partake in is crying, whimpering, fighting sleep and generally everything that make the first few months of Motherhood that little bit harder.  When we were asked by certain people what we would like as a gift for the new arrival we decided to make a list, one of the things we asked for,  having read other people’s reviews was a Ewan The Dream Sheep.  We are so happy we did because this little wooly friend has been a life saver. 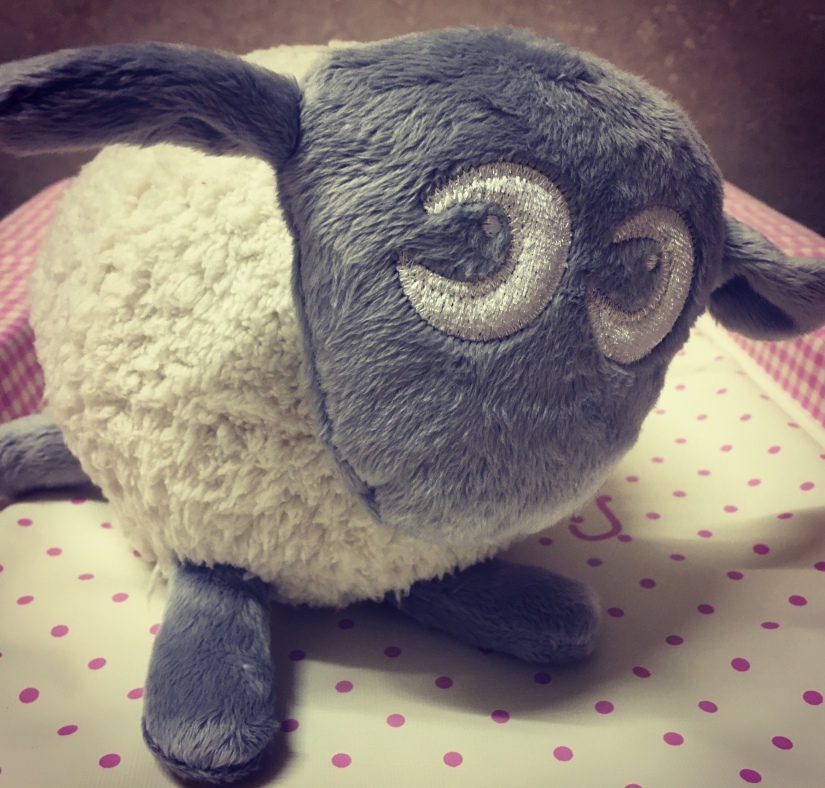 Ewan runs on AAA batteries and has a red nightlight built into his fleece.  He has four legs (obviously!) and each leg when pushed produces a different sound that is designed to gently relax your baby and lull them to sleep.  One leg has relaxing harp music (this is Eden’s favorite), two have white noise kind of sounds and the other has a heartbeat, similar to the heartbeat sound you hear when your baby is being checked by a hand held sonograph.  I have used Ewan from the day and hour we brought Eden home from hospital.  Ewan is probably one of the best baby gifts we received, he is worth his weight in gold!  Now I’m not sure if I should put it down to luck or if I should thank Ewan but our baby girl has slept the whole night through since 4/5 weeks old, in the early days if she did stir in the middle of the night I just turned Ewan on and she was back to sleep again in no time.  For this reason I highly recommend Ewan The Dream Sheep, he’s a star!!